The Quarterstaff: Grandfather of all weapons

Whoever is master of the staff may defend himself against any one man, with back or small sword, as has often been experienced”- Donald McBane 1728

Chinese martial artists call the staff “the grandfather of all weapons”. When we study our historical fighting manuals the old British masters seem to absolutely agree when it comes to our own Quarterstaff.

But why? Who trained with it? And how do you use a Quarterstaff?

A wooden staff 7-9 feet long would be called a “short staff”, a “long staff” being anything longer [1]. The best were made from Ash [2], and we have a few theories on the name:

Once you learned how to use the Quarterstaff you understood how to use all the pole-arms of the Isles [1][5]:

The last few had some extra tricks to learn but not bad for one little stick. Plenty of masters couldn’t praise it enough. Zach Wylde in 1711 writes “For a man that rightly understands it, may bid defiance and laugh at any other weapon”[6].

He goes on to say that Quarterstaff techniques are basically a fusion of Broadsword and Smallsword (the cutting and thrusting swords of the day). There’s an element of truth to that depending on the historical manual you’re studying.

Who trained with the Quarterstaff?

From Thomas Barratt the stage gladiator called “old chopping block” teaching wandering woodsmen and gamekeepers“He taught the use of the broad sword for the army, and the quarter staff for park keepers, woodmen and others”[7]…

To Gentleman George Hale who recommended everyone study “single Rapier and Quarter-staffe “ to complete their martial arts education[8].

It was more commonly carried than the sword if we go by court records. In Nottinghamshire between 1485 and 1558 the staff was used in 53 out of 103 reported murders. The sword? Only 9[9].

Running a business? Better keep your staff handy. In the reign of Henry VIII inn owner Long Meg of Winchester had to challenge a dine and dash customer to “take that staffe and have a bout with me for thy breakfast”[9].

In the 15thC a Mr. Austin Bagger the Waterman was attacked by an angry rapier wielding passenger. Austin remembers his lessons and the customer gets “thoroughly beaten with oars”[9].

An essential skill for the small businessman it seems.

How do you use a quarterstaff?

We know what it looks like, we know how important it was, so how do you use it?

It depends who you ask.

The first instructions we get are from an anonymous 15thC manual in a manuscript “Cotton MS Titus A xxv”[10]. It’s…well let me give you an excerpt:

Yea. Attempts have been made to modernise the instructions but we’ll never know for sure how accurate the results are.

The next instructions we get are easier to follow. George Silver in the 16thC shows us some fundamentals[1]: 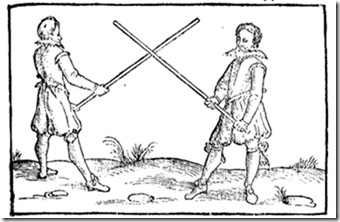 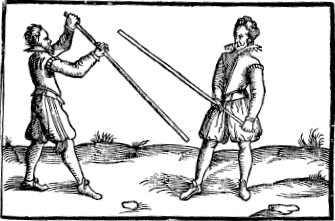 Learn more about our Quarterstaff classes

Check those pictures again. That’s how you hold a quarterstaff! Don’t hold it in the middle, that’s called “Halfstaffing”. Hollywood lied to you.

Later on in the 17thC we find instructions from Joseph Swetnam[4], techniques influenced by rapier fighting. Old Joe Swetnam tells us the thrust is king when staff fighting and if your opponent lifts up his staff to strike…pop him in the face with a quick thrust single.

Can’t go too complex with a big ash stick.

His method of parrying involves moving the staff point around in a way that any rapier or smallsword fencer would recognise.

The manual isn’t hard to read despite the dated language so if you can track down a copy it’s a good source of instruction.

Next we see Zach Wylde and his staff instructions[6]. He says by his time the Quarterstaff was losing popularity; “I wonder that it is not more in Vogue in this Nation, considering its Excellency” but he gives us two new techniques for the quarterstaff: 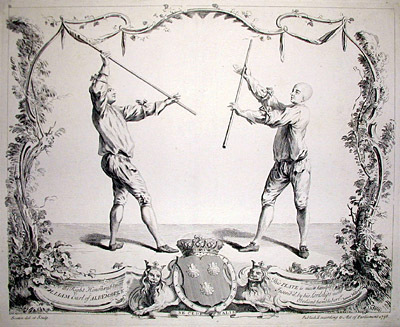 Moving into the 19th century. R.G. Allanson-Winn the Victorian self defence expert shows us parries moving from the base of the staff like Wylde[3], but his grip is closer to halfstaffing. He describes the thrust but calls it unsafe to practice.

No thrusts, all halfstaffing. By the 19th century it was more sport than self defence, kept alive by Victorian historical romanticism.